Southern Ants (Garden Ants)
The Southern Ant (Monomorium antarcticum) is the most common. This species shows a lot of variation, and it is still uncertain whether it is a single species or a complex of several species.

Workers are about 3–4 millimetres long, and can range in colour from orange with darker markings to entirely black. They live in almost all habitats: forest, grassland, dry river beds, sphagnum bogs, rotting logs and suburban gardens and lawns. They also forage along the shore or high in the mountains. Garden ants are known to gather and store plant seeds. Nests range from small to well populated, with thousands of workers.

Pharoah’s Ants originate from the tropics and require artificial heat in order to survive and reproduce and tend to live in large heated buildings such as hospitals, hotels and blocks of flats. This ant’s diet largely consists of decomposing foodstuffs and it carries harmful germs picked up from when it has been feeding.

Red Fire Ants
Workers 3mm long and the Queen up to 6mm long. These ants are a reddish brown colour and live in colonies of up to 100,000 or more ants!

Each colony is led by a Queen who lays between 150 and 200 eggs per day. Fire ants build mounds of up to 2 feet high to live in and these are usually built in open, sunny spaces. Fire ants sting both animals and humans and their sting is extremely painful.

Bed Bugs
Bed bugs are nasty creatures that feed on blood. They are known for invading homes and infesting businesses. As well as causing bites and rashes, bed bugs may even trigger allergic or asthmatic reactions. Please refer to the separate Bed Bugs section for more info about the pest and recommended treatments. 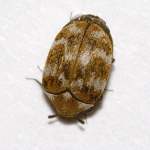 Carpet Beetle
This species comes in a variety of shapes, sizes and colour but generally they resemble a ladybird in shape with their colour ranging from black to brown and even white and yellow. Adults generally 2-3mm long.

Adults are normally not a pest as they tend to live outside and eat nectar and pollen. However, towards late summer they are extremely likely to enter your home and lay up to 40 eggs at a time in any natural fibres, such as curtains and carpets. The eggs hatch as larvae within 2 to 3 weeks and it is these larvae – sometimes called Woolly Bears – that do so much damage, because their diet consists of any natural fibre such as carpets, soft furnishings and clothes.

Tobacco Beetle
Is an insect very similar in appearance to the drugstore beetle (Stegobium paniceum) and the common furniture beetle (Anobium punctatum), and all three species belong to the family Anobiidae.

These beetles are around 2–3 mm long, and brown in colour. The beetles, which can fly, live 2–6 weeks and do not feed as adults.

As indicated by its common name, the cigarette beetle is a pest of tobacco, both in the refined cigarette packet presentation and also as stored in hogsheads and bales, but is also a minor pest of oilcake, oilseeds, cereals, dried fruit, sage, flour, and some animal products.

Borer
House borers (Anobium punctatum) which are only 3–4 millimetres long, were introduced from Europe. People with old wooden houses and furniture know them all too well. Female beetles lay eggs in cracks, crevices, end-grain timbers, or old borer holes. The larvae hatch and eat the timber for two to three years, making unsightly holes and tunnels.

Adults bore exit holes in the wood in summer, and fly away. Little piles of dust near holes indicate an infestation.

German Cockroach
Brown in colour with 2 dark stripes on the thorax. The wings are as long as the body or slightly overlapping in both sexes. They scuttle and are very good climbers due to the sticky pads on their feet, which gives them the agility to climb up smooth surfaces including glass. If conditions are warm enough they will also fly. German cockroaches prefer warm, wet locations with high humidity such as kitchens, bathrooms and laundry areas.

American Cockroach
Also known as the palmetto bug, American cockroaches are not so common in NZ homes. They are reddish brown in colour and have a pale yellow area around the perimeter of the pronotum. These cockroaches tend to be found in dark, undisturbed areas that are high in humidity. 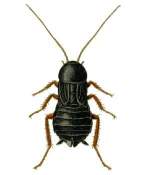 Oriental Cockroach
Dark brown to black in colour. The wings are undeveloped in the female but cover ¾ length of the abdomen in the male. Both sexes prefer to scuttle but can climb some rough surfaces. Unlike German cockroaches Oriental ones cannot fly. They prefer cooler, damper areas such as basements, drains and even survive outdoors on rubbish tips.

Cat Flea
The cat flea is a small sucking insect. Adults range from 1–2 mm long and are usually a reddish-brown colour, although this can vary. The cat flea, and all other fleas, are compressed laterally resulting in an extremely thin insect that can be quite hard to find in an animal's coat.

The cat flea's primary host is the domestic cat, but it is also the primary flea infesting dogs in most of the world. The cat flea can also live on other animals.

Cat fleas can transmit other parasites and infections to animals and also to humans.

Human Flea
The human flea is a cosmopolitan flea species that has a wide host spectrum.

Fleas are a pest to their hosts, causing an itching sensation that results in discomfort and leads to scratching in the vicinity of the bite. Flea bites generally cause the skin to raise, swell and itch. The bite site has a single puncture point in the center. Bites often appear in clusters or small rows and can remain inflamed for up to several weeks.

Hair loss as a result of itching is common, especially in wild and domestic animals. Anemia is also possible in extreme cases of high-volume infestations. 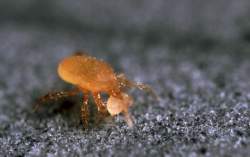 Mites
Mites (Acari order) are found in most habitats where animals exist. They are so small that they are often overlooked. The most abundant mites live in the upper layers of the soil, playing an essential role in the breakdown of organic content.

There are several varieties of mites including:

Silverfish
Silverfish are from the Family Lepismatidae and are white to brown-grey or bluish-silver in colour. Silverfish are teardrop-shaped insects that measure up to 12-19 mm in length with three long bristles on their rear. They grow from egg to adult without visible change in appearance.

Capable of thriving in most climates, silverfish prefer to dwell in dark, damp areas such as basements, attics, kitchens and bathrooms. They are especially attracted to paper and damp clothing. Silverfish are commonly found in stored boxes in garages and sheds. Silverfish feed on carbohydrates, particularly sugars and starches. Cellulose, shampoos, glue in books, linen, silk and dead insects may be food sources and they have also been found in unopened food packages.

White-Tailed Spider
Two species of the Australian white-tailed spider, Lampona cyclindrata and Lampona murina, have been recorded in New Zealand, and appear to have been present for at least 100 years. Both live in cracks and crevices, sometimes on the outside of houses.

The bite of the white-tailed spider is not poisonous to humans. There has been considerable publicity about serious skin infections, called necrotic lesions, that may develop near bites. In a recent Australian study of 130 confirmed white-tailed spider bites, 75% of people said the bite was less painful than a bee sting, and nobody developed lesions.

Redback Spider
In recent years small numbers of the Australian redback spider (Latrodectus hasselti) have been recorded in different parts of New Zealand. Because it prefers dry sheltered places, it is often found in outbuildings.

There appear to be only small, localised populations, but there is some possibility of the spider spreading further through much of the North Island and northern parts of the South Island. While New Zealand’s damper climate does not favour the redback, their liking for modified urban environments could provide shelter from the weather.

Katipō
Māori knew of a poisonous spider that lived on or near some of the warmer North Island beaches. They called it the katipō, which means ‘night-stinger’. The scientific name is Latrodectus katipo.

Only the adult female katipō bites. A fully-grown female is about the size of a garden pea. It is black, with a bright red stripe on its back.

Katipō are naturally shy, and would probably only bite if accidentally squashed. Few New Zealanders have ever seen one, let alone been bitten. Despite their reputation, there is no solid evidence that anyone has died from a katipō bite in the last 100 years.

Harvestmen (Daddy Long Legs)
Harvestmen (Opiliones order) seem the most bizarre of all the arachnids. In fact they are the most harmless creatures, being one of the few arachnid groups that do not use poison.

Although native harvestmen are numerous and widespread in New Zealand, the most common is the introduced European species Phalangium opilio (known as daddy-long-legs), found throughout the country. Because they were so common in English fields during the harvest, the group has become known as harvestmen.

Grey House Spider
The grey house spider (Badumna longinqua) is probably the most common spider in New Zealand, and lives in most homes and gardens. It arrived from Australia in the 19th century.

Badumna has a comb of special hairs on its back legs, to comb out the threads from its spinnerets. It builds a cobweb with a narrow tube and traps prey with a fine ‘wool’ of threads between the structural threads. Tangled prey vibrate the lines, alerting the spider.

Crab Spider
Crab spiders (Thomisidae family) are common on garden plants, but are well camouflaged. They wait with outstretched arms for insects to land on the plant, then grab them. Crab spiders usually inject venom into the head of their victim and suck out its insides. They leave the body intact. 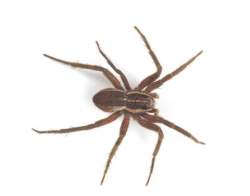 Jumping Spiders
Jumping spiders (Salticidae family) have eyesight to rival a primate, and a mammal-like cunning. They will stalk a fly on the edge of a table, then walk hidden towards it, checking its position before pouncing. If the spider has to approach directly, it will crouch down and move very slowly until close enough to pounce – like a cat stalking a bird. When you look at a jumping spider closely, it will often raise its head and look back. 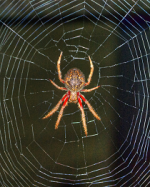 Ord-Web Spider
The common orb-web spider (Eriophora pustulosa) is seen in gardens throughout New Zealand. Often its lines are weighed down with drops of morning dew, making the web look like a diamond necklace.

At night the spider either remakes or repairs the web, and then waits for insects to fly into it once again. The spiralling lines have tiny glue droplets which stick to an insect that touches the web. Once the prey has been caught, the spider wraps it in a shroud of silk so it cannot escape. The ‘spokes’ of the web do not have glue, and are used as attachment points for the spiralling threads.

Pseudoscorpions
Pseudoscorpions are small scorpion-like arachnids common throughout New Zealand. They are usually no more than 5 millimetres long, and are often mistaken for baby scorpions. They are predators, and use their pincer-like pedipalps to catch small insects. Unlike scorpions they do not have stinging tails.

Pseudoscorpions are shy and retiring. Sometimes they hide under stones or foliage, but the best way to find them is to sift leaf litter from the forest floor on to a dish, and then wait for them to move.

Ticks
There are nine species of tick present in New Zealand. Only one species, Haemaphysalis longicornis, was introduced, the rest are native species.

The most common tick the New Zealand public is likely to come across is the Cattle tick or Bush tick.