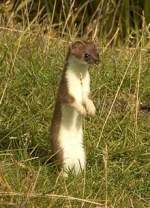 Possums
Possums (Trichosurus vulpecula) were first brought from Australia to form the basis of a fur industry. This initial attempt failed, and it was not until 1858 that they were successfully introduced at the same place. They are now found in about 95% of all farmland, scrubland and bush.

They eat and damage the forest at every point, taking mainly leaves, but also buds, flowers, fruit and seeds from the tallest tree tops. On the ground they eat seedlings, saplings and sometimes bark. Possums also eat parts of perching plants, scramblers, climbers, some tree ferns and fungi.

Stoats
Large numbers of stoats were brought from Britain to control ‘verminous rabbits’. They immediately spread to the bush, where they preyed on native animals. Stoats are energetic, bold and versatile hunters, foraging in every hole, under any cover and up the tallest trees. They are also good swimmers.

In the bush, they eat more birds than any other food. Rats and mice, rabbits, possums, hares, lizards and insects form the rest of their diet – their population can rapidly increase when food becomes abundant.

Feral Cats
Captain James Cook and later whalers and sealers introduced cats, but these did not become common until the 1830s. In the 1870s, rabbit numbers were driving farmers from their land, so quantities of cats were released to control them.

Wild cats live high in the mountains and along the coast, as well as in bush, scrub, and on farmland. They feed mainly on young rabbits, rats and mice, but also on native birds, lizards and large insects such as wētā, cicadas and dragonflies.

Rabbits
Rabbits were brought to New Zealand and released for both food and sport at various sites as early as the 1830s.

Rabbits have cost New Zealand many millions of dollars, through the direct cost of controlling them, and the loss of production from farms. Their impact on the drier areas of the South Island has been little short of an ecological disaster, as the vegetation grazed off by rabbits has never recovered. The worst affected areas – once well covered with tussock, grasses and small shrubs – now have very little vegetation cover, which has led to soil erosion by wind and rain. The loss of soil has left areas where only the hardiest colonising plants will now grow. Burrowing by rabbits in some soil types and on steep slopes has also led to soil erosion.