Honeybees and Bumblebees
Bees are important in pollinating many native plants: they carry pollen from flower to flower. Most of New Zealand’s native bees are black, and some dig nest holes in the ground. All bees collect pollen to feed to their larvae.

Honeybees form a hive with one egg-laying queen, some drones (males), and thousands of workers (females). The workers build the honeycomb, collect nectar and make honey, and feed the larvae and the queen.

Bumblebees also live in colonies. They build nests in dry places such as wood piles or compost heaps. They usually only sting if disturbed.

DIY Options - NONE this species is Protected

House Flies
Two groups of flies are grouped under the term house fly (or housefly) these are of the Musca and Fannia genera. Fannia are lesser house flies and are a little smaller that Musca house flies. Lesser house flies are often the type that are seen flying in angular patterns around the centre of a room. They can keep flying all day and will only land at night. This makes them a little more difficult to control using surface treatment alone.

Blow Flies
Blue bottle and green bottle flies have shiny metallic-looking bodies and are larger than houseflies and are associated with rotten meat where their eggs are laid and the larvae (maggots) feed before pupating and emerging as adult flies. An infestation of blow flies suggests a dead animal carcass in the vicinity e.g. a dead rat in the roof space.

Cluster Flies
Cluster flies are dull black flies that in autumn cluster together in large numbers in dark dry places like attics to survive winter.

They are named cluster flies because of their habit of congregating in large groups or swarms in dark places such as attics, corners of dark rooms, 'nooks and crannies' and 'cracks and crevices'. Each fly releases a pheromone (smell) that attracts others. This pheromone will linger on even after all the flies have been destroyed and removed and thus will continue to attract cluster flies to that area so that the clusters keep recurring. It is therefore important that treatments are continued even when there are no flies present. 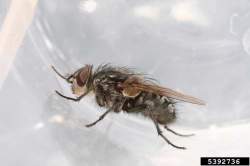 Striped Mosquito
Named for the white bands on its legs, the silent striped mosquito (Aedes notoscriptus) was first noted in Auckland in 1916 and probably arrived from Australia. It is the mosquito most often seen in the North Island and females may bite during the day and at night. In the South Island the species is thought to occur only in Nelson, Marlborough and Christchurch.

Brown House Mosquito
The brown house mosquito (Culex quinquefasciatus) is native to warmer parts of the Americas. It is thought to have arrived via the water supplies of American whaling ships, probably in the 1830s. It is found around North Island ports and occurs as far south as Marlborough. It readily bites people, and lays its eggs in standing water around houses (for example, in guttering, bird baths and septic tanks).

Southern Saltmarsh Mosquito
The southern saltmarsh mosquito (Aedes camptorhynchus) arrived around 1998. It was first found in swamp land near Napier, after complaints of its vicious biting. In its native Australia, this species can carry the Ross River virus and other diseases. Despite an eradication campaign, the insects have shown up in other parts of Hawke’s Bay, and in Gisborne, Northland and Marlborough. Eradication seems to have been successful in Napier, and similar schemes are in place in other areas.

Saltwater Mosquito
The saltwater mosquito (Aedes australis) probably arrived at southern New Zealand ports on timber ships from Australia. It was first recorded in Stewart Island in 1961, and is also found in Southland, Otago and Westland. As this species does not stray far from coastal rock pools, it does not often bite people. Females do not need a meal of blood in order to lay eggs. 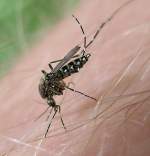 Moths
Some moths are more closely related to butterflies than to other moths.

Some native species such as the porina moth (genus Wiseana) have adapted so well to lawns and pasture that they have become pests. Long-established exotic arrivals such as several species of clothes moth destroy carpets, stored dry products and clothing. Introduced species continue to arrive, but few become significant pests. 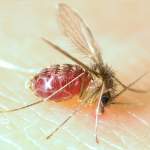 Sandflies
Sandflies are found wherever there is flowing water and bush. They are often found at beaches, and at the edges of lakes or swamps. The New Zealand blackfly occurs in the North Island and around the coasts of the South Island. The West Coast blackfly is confined to the South Island, where it is a nuisance.

After mating, the female searches for a meal of blood – needed to produce eggs. (Little is known about the male, who is a vegetarian.)

Sawflies and Wood Wasps
The sawflies and wood wasps are a primitive group, separate from all the other Hymenoptera. Early in the evolution of wasps, this group stayed relatively unchanged, while the ancestors of most of today’s wasps developed a narrow waist and other features.

Paper Wasps
These wasps make papery nests from dry plant fibre mixed with their saliva. The two introduced paper wasp species prefer life in the open – in city and suburban gardens, farmland, scrub and open country. They make nests in shrubs and small trees, under the eaves of buildings, or even hanging from fencing wire. Their nests are small – a suspended ‘umbrella’ of paper cells